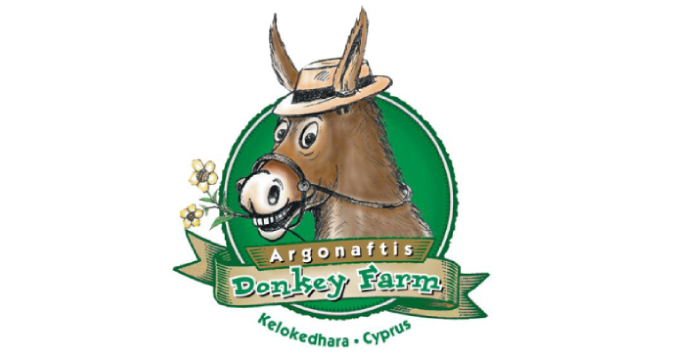 The Argonaftis Donkey Farm was built in 1998 near the village of Kelokedara to provide shelter and veterinary care for the Cyprus Donkey, which was on the verge of becoming an endangered species. At the same time, we created an exclusive and unique excursion for the adventurous tourist as a way to promote our cause to save the native donkeys. The resulting product is an authentic experience of Cypriot culture with local entertainment, homemade food and hospitable staff, all while located in the countryside of Cyprus. The whole ambience is exceptional and welcoming for all ages!

Our aim is focused not only on the satisfaction of our guests, but also on the healthy breeding program we have instituted for our sheltered donkeys. Each donkey bears a sub-skin microchip and are provided with a strong program of preventive medical treatment.

We can accommodate up to 160 people for lunch or dinner during winter months, and 300 people or more in the summer.

The Argonaftis Donkey Farm is located on 19 hectares of land, 30 km East of Paphos in the Xeros river valley – one of the most untouched and tranquil parts of the island. The beautiful landscape and the variety of fauna and flora makes it the perfect setting for nature lovers. Our facilities attempt to blend in with the natural environment, using stone & wood as the main constructive materials.

Kelokedara village is part of a special environmentalist tourism project, dealing with sustainable and agro-tourism. The main aim is to help local village economies participate in tourism without changing their traditional lifestyle.

The village lies on the eastern slope of the Xeros River, housing less than 300 inhabitants. During the Ottoman Period (1571-1878) and the period of British colonial rule (1878-1960), the village served as an administrative centre for the area and therefore one still finds such facilities as an old police station, a courthouse, and the abandoned primary school which is now used as a cultural centre. A short time will be given to wander around the village and enjoy the typical Cypriot architecture and atmosphere, found only in such remote areas of Cyprus.

Some things just keep on running, like this old Bedford “chicken bus,” still in action with Mr. Christodoulos as the driver. Mr. Christodoulos bought the bus new in 1969, and for the past 34 years he his bus acted as a lifeline for the village, transporting villagers down to the towns and urban centres. In the old days, this bus was the only means for locals to go do their shopping or for older students to reach their schools in Paphos. The village bus also supplies the village with the necessary supplies and brings in the daily post.

Today, Argonaftis has drafted this bus to transfer all the adventurous Donkey Riders down to the Farm, a 15-minute journey through picturesque landscape dotted with orange groves.

Upon arrival at the Donkey farm guests will sample many of local delicacies such as halloumi cheese, “sushukko,” village bread, olives and cucumber, all of which are produced and made in Kelokedara, as well as local wine and the famous local distilled “Zivania”.

All visitors will have a chance to meet and pet the friendly donkeys before the demonstrational safety briefing on how to ride the Cyprus Donkey. Each rider will be given the appropriate donkey to suit their height and weight, then we will begin the 25-minute ride to the Sindi Monastery, through the riverbed and along country tracks passing local shepherds with their flocks of grazing sheep and goats. Once at the monastery, we will have an approximate 20-minute break for guiding, light refreshments and free time to explore on your own.

The entire Donkey Ride is conducted under the watchful supervision of our professional staff to ensure safety and comfort for all.

The abandoned 16th century Sindi Monastery has been restored by UNESCO, granting it the prestigious Europa Nostra award in 1997, and became recognised as a World Cultural Heritage monument. It is surrounded by some of the most spectacular landscape in Cyprus as well as the ruins of four watermills which are remnants of an era long past, when wheat and barley were cultivated widely and abundant amounts of water flowed regularly through the valley. Today, the river only flows from December to May and is dry during the rest of the year.

Water, soft drinks, beers and other imported alcoholic drinks can be bought at reasonable prices at our fully-stocked bar.

Following the meal, we will entertain you with traditional Greek and Cypriot music and dancing, including the famous sirtaki which will tempt you to join in. The party then continues with international music where you can dance the night away under the stars.

A diploma will be handed out to every participant who completed all the ‘tests’: zivania drinking, sirtaki dancing, and donkey riding. Take it home as a souvenir and as proof that you were initiated into traditional Cyprus village culture, and that you were able to capture the authentic spirit of the island.